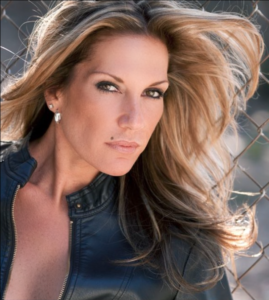 Christine Sclafani was born in Paterson, New Jersey and was raised in South Florida. A professional Model, Actress, Host and Spokesperson, the never camera shy beauty started modeling in her late teens out of Miami, FL for several swimwear and sportswear companies. In addition, Christine was featured in numerous magazines such as Harley Davidson, Swimwear Illustrated and Playboy just to name a few. With the desire and drive to pursue a career in “Showbiz” she moved to New York City to study dance and theater. Christine’s love for the camera was undeniable. Along with acting, she shares a love for mixed martial arts, roller derby, photography, cinematography, directing and the making of films. Christine is a proud member of the Screen Actors Guild/AFTRA.